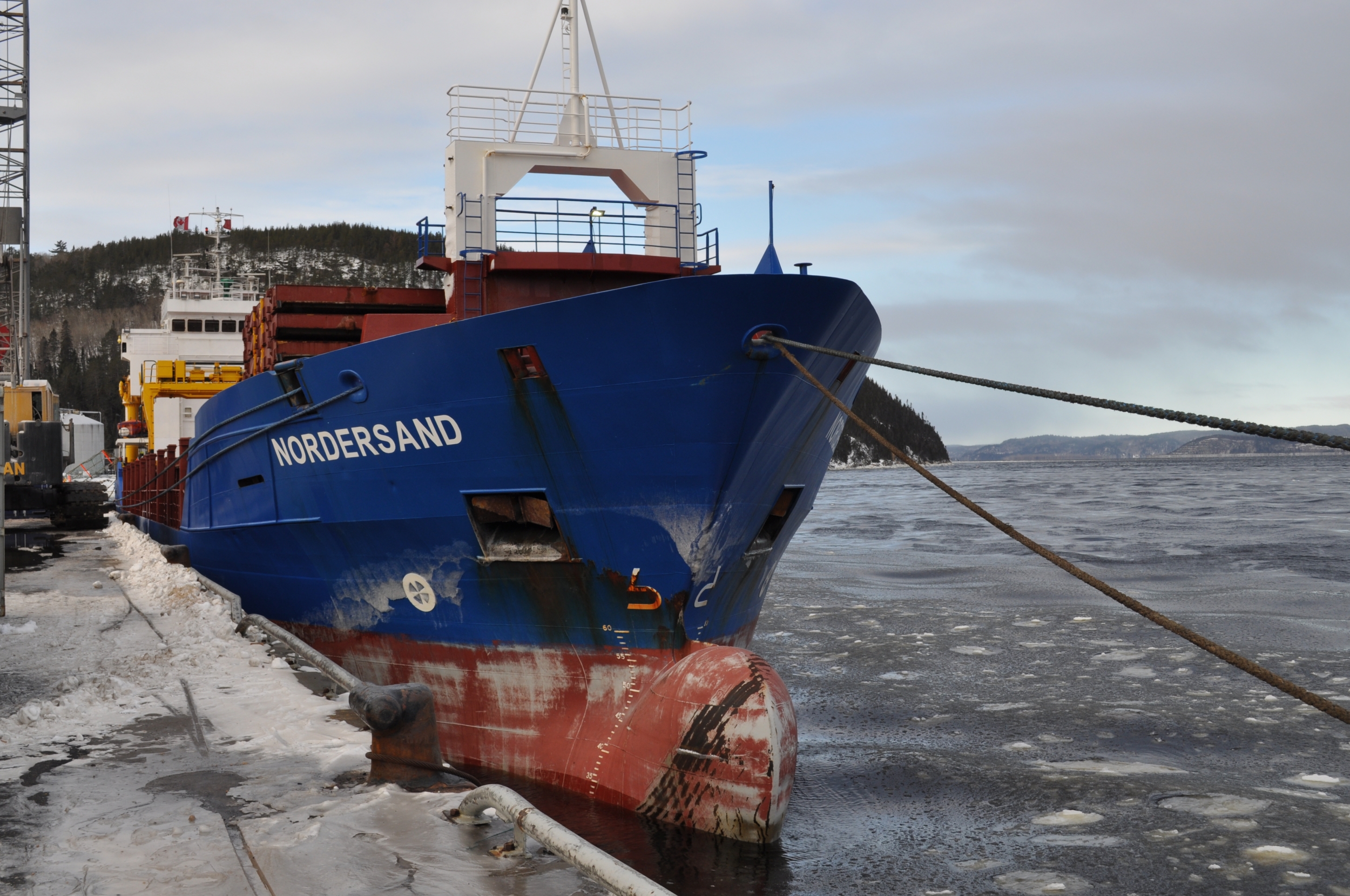 The Port of Saguenay welcomed its first ocean-going vessel of the year as the M/V Nordersand docked at the Marcel-Dionne wharf in Grande-Anse late Wednesday. The Saguenay Port Authority celebrated this tradition by presenting a commemorative plaque to the captain, Mr. Yevgenii Oberemok.

Flying the Gibraltar flag, the M/V Nordersand, from Scandinavia, arrived at the Port of Saguenay with a cargo of general containerized cargo. The 99-meter-long vessel, with a maximum draft of 5.7 meters and a capacity of 4,500 metric tons, left the Marcel-Dionne wharf on Friday January 8 in the early evening, in direction of Varberg in Sweden.

Maritime tradition dictates that the first ocean-going vessel to anchor the waters of the Port of Saguenay be highlighted in a special way. This year, the plate delivery has been adapted taking into account the safety rules related to COVID-19. To be eligible for this honorary mention, the ship must absolutely be an ocean-going vessel coming from a foreign port, it must have made its crossing without having made a stopover before arriving at the Port of Saguenay and it must come to carry out a loading or unloading operation at the port.

A busy 2020 for the Port of Saguenay rail service

The Port of Saguenay has had a busy 2020 despite the particular economic context and the cancellation of the cruise season, in accordance with directives issued by the Government of Canada.

The past year has been marked by the sustained use of the rail service for the transport of goods with nearly 1,000 wagons that have passed through the railroad. In total for all of the Port of Saguenay's facilities, 548,500 tonnes of goods were transhipped, a decrease of 15% compared to 2019. The Port also recorded a very slight decrease in the number of boats that visited its marine facilities, with 71 ships docking this year at Grande-Anse, compared to 72 last year.

In 2020, the Port completed the first year of operations for the new Granules 777 wood pellet terminal, which is now operating at maximum capacity. It is the second largest customer of port facilities in this sector of activity, positioning the Port of Saguenay as the most important shipping port of wood pellets in Quebec.

The year 2021 promises to be a pivotal year, as the Port will continue to develop its industrial port zone, recognized as one of the largest in Canada.


Back to home    Archives